I took a quick trip to Chicago last weekend to see some art! Though brief, it was full—a grateful getaway and a memorable aesthetic adventure.

The impetus was Tesseract, a new dance/video work created by video artist Charles Atlas and dancer-choreographers Silas Riener and Rashaun Mitchell. Tesseract was performed at Chicago's Museum of Contemporary Art (MCA)—and at the Walker Center in Minneapolis the week before—as part of "Common Time," a knockout Merce Cunningham exhibition currently on view at both institutions.


Atlas enjoyed a decades-long collaborative practice with Cunningham (1919-2009), documenting many of the legendary choreographer's dances, but also creating with him a host of experimental dance-for-camera works that radically reimagined the relationship between dance and video. Riener and Mitchell, meanwhile, were both acclaimed dancers in Cunningham's company near the end of its long run. (It disbanded, per the choreographer's instructions, upon his death.) So their new collaboration is a little "Merce Cunningham: The Next Generation," as Oren Goldenberg, a Detroit video artist and one of my travel buddies, put it. (Oren, who makes terrific dance-for-camera videos himself, is the subject of my next Essay'd essay, which will be out in a couple weeks.)

I was so curious to see what these three Mercists had made together. It turned out to be interesting, stylish, and ambitious but, I thought, ultimately a bit of a mess.

Oren's Star Trek reference ended up being pretty appropriate: Tesseract, which is half 3D dance video and half live performance with live video effects, has a decidedly sci-fi flavor. There were alien landscapes, alien scenarios, alien architecture, and (in a surprising and funny moment) an alien language; there was an especially beautiful dancer in shiny silver and black that looked and moved like an automaton; and, of course, there was the self-consciously hi-tech quality of the performance itself: not only the 3D dance film of the first half (a pretty exciting experience and, I thought, a delightful use of the medium), but also the live video effects of Act 2, which found a graceful (you might say dancerly) Steadicam-equipped videographer onstage with the dancers, whose likenesses were simultaneously projected onto a scrim and digitally manipulated by Atlas in real time.


There was, in the end, much to appreciate about Tesseract, especially in the 3D film, which cut between six different scenarios with markedly different sets, choreographies, costumes, and video effects. My favorite was a sort of Martian landscape, complete with a little Ray Bradbury building on the horizon, in which a group of orange-clad dancers with little geometric growths in their costumes were green-screened into the scene, collage-like, and proceeded to manipulate and move, slowly and exploratorily, through a series of larger shapes with which they were each paired. Subtle, mysterious, seductive stuff.


Aside from a few decidedly over-the-top moments, I found myself mostly absorbed by the video, but I had a harder time getting into the live performance. It wasn't just that the on-stage videographer was distracting (he was); it was also that the video effects felt a little hokey and arbitrary, and that they reminded me of stronger, surer works that incorporated similar effects more successfully, like Lucinda Childs's 1979 Dance, which I saw on the same MCA stage in 2009 (and which I wrote about in this very blog!), and Cunningham's own Biped (1999), which made an indelible impression when I saw it in Ann Arbor all the way back in 2004. Both of those pieces include images of moving bodies projected onto a scrim in front of the dancers, but in each, the live dancing and the film/video effect are integrated into a coherent whole.


Tesseract emulates both of those classic works, with the key difference that now the video is live. Does it need to be? It felt showy and a little contrived—something done because it could be done, rather than something undertaken to meaningfully advance the relationship between dancer and moving image. A stimulating challenge, no doubt, for the whole team of artists, but does it justify the distracting and distancing effect on the audience? I give the creative trio credit for much about Tesseract, which, in the end, I'm glad I saw (and which was, I ought to say, a robust and tentacled work, not easily summed up) but ultimately I felt that it didn't hang together. It lacked a center, and at the same time there was so much of it. (Do I sound like a cranky minimalist?) It seemed, as Oren remarked later, experimental in a way that connotes something still being worked out—something unfinished, in process.

More coherent, even in its overabundance, was "Common Time," the Cunningham exhibition that occupied the entire fourth floor of the MCA, and which we returned to the museum the next day to experience. Its theme is the dense network of creative collaborations and relationships that typified Cunningham's practice—and that brought dance into fruitful contact with the wider art world.


Cunningham was an inveterate collaborator, working with a dizzying array of influential (largely New York-based) artists over his long career. They created sets, costumes, music, soundscapes and, in the case of Atlas and fellow video artist Nam Jun Paik, films and videos that augment, complement, complicate, and ultimately co-create Cunningham's work. (Cunningham maintained a remarkable degree of trust in his many collaborators, who were typically encouraged to pursue their own visions independently. Often, it was only in performance that all the elements would come together.) The exhibition overflows with these materials, including sets by Frank Stella, Robert Rauschenberg, and Robert Morris; costumes by Rei Kawakubo; scores and sound art by John Cage and Pauline Oliveros; and more Cunningham videos than I had ever hoped to see in one place. In addition, there are a number of standalone works by many of these artists, as well as ephemera from others with whom Cunningham did not actively collaborate, but who labored around the same time and place in their own influential and boundary-breaking ways, like Trisha Brown and Yoko Ono.


"Common Time" is lavish, overwhelming, transcendent. It is at once a sprawling survey of some of the most groundbreaking American artists of the latter half of the 20th century, and a tightly focused examination of some of the circumstances and concerns that united them. (It's nuts to think that this is just half of a show, the other half filling the galleries of the Walker in Minneapolis.)

Most exciting, to me, was MC9, an unforgettable, immersive installation by Charles Atlas that reinforced my admiration for his work (any ambivalent impressions of Tesseract notwithstanding). Picture it: you enter a long, dark room, one of the MCA's impressive barrel vault galleries, and find yourself surrounded by an architecture of screens: monitors of varying sizes, many quite large, most sleek and flat, a few boxy; some mounted above your head, and others installed at body level. There is an incredible visual and aural commotion as nine channels featuring looping excerpts from 21 different Atlas/Cunningham dance-for-camera collaborations made over 40 years are simultaneously played (so that multiple screens display the same works at the same time, while different screens display others). Videos do not play back-to-back; edited between them are either a countdown, such as you'd see on an old film header (complete with penetrating, metronomic tones marking the descent), or else (literally) luminous, saturated color fields, a huge pink rectangle here, a green one there, that briefly catch and fill the eye, offering a respite from the relentless movement in the videos, and casting colored reflections on the bodies of the other spectators, who stand and take it all in or perambulate through the ad hoc promenade—agog, indifferent, or somewhere in between.


I got lost in that room, and might have stayed for hours. There was so much happening, so much to take in. It was a dreamy, mysterious space, both cavernous and intimate. There was an overlapping of sound—warm, ambient, and suddenly clear—and everywhere you looked, there were bodies in motion (in that crisp, awkward, balletic Cunningham style), bodies both historic and near-contemporary, in black and white and vivid color, life-size bodies that were imaginatively de- and re-contextualized, tracked up close by fluid, moving cameras, and depicted in images nested within images. A techno-temple to a titan, made of time. I took a brief video inside with my phone. It's just a phone video, nothing special (actually it's pretty bad), and it offers the barest glimpse of the thing itself, but I'm compelled to share it anyway:


I left "Common Time" and Chicago with a feeling of gratitude for having seen so much work by Cunningham and his cohort, and also with a sense of the weight and fullness of his long life. Cunningham died at 90, and had been working, collaborating, and documenting his efforts for nearly 60 of those years. I am inspired by this life: by the extent of his accomplishments, by his evidently vast capacity for friendship, and by his openness to time and chance and to moving forward with the world.

On the subject of time and aging, I should wrap up by mentioning that the MCA has another terrific exhibition up right now, "Eternal Youth," that would itself have been worth the trip from Detroit. It's a group show concerned with youth culture since the 1990s. I'm not going to go into it at length here, but suffice it to say that it's a sexy, funny, challenging, and queer-forward show, full of inventive, absorbing work by a diverse roster of artists both well-known and emerging. As such, it's a nice counterweight to the somewhat High Art seriousness of "Common Time," which might even seem a little stuffy, a little camp, by comparison.

Coda: While at the MCA, I was delighted to run into my friends Lesley and Megan from Detroit, who took me around "Eternal Youth" and showed me some of their favorite pieces. Here they are watching one of my favorites, a 20 minute video by Jumana Manna called Blessed Blessed Oblivion (2010), an earthy, engrossing exploration of the macho mystique of East Jerusalem thug culture. (You can watch it on Vimeo here.) 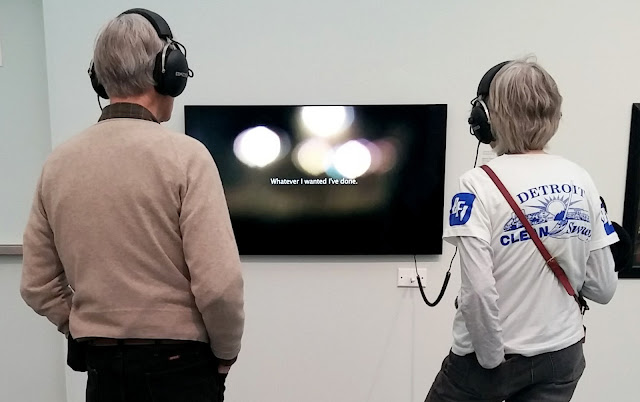 Posted by Matthew Piper at 9:20 PM

I'm a Detroit-based writer, editor, and librarian at large. I'm particularly interested in modern and contemporary art, architecture, and urbanism.
I'm the editor-in-chief at Essay'd, where we publish short, illustrated essays about contemporary Detroit artists. My work has also been featured in Curbed, Detroit Research, Infinite Mile, KnightArts, Model D, and the second edition of Thanks For the View, Mr. Mies.
I'm currently researching a book about the ongoing impact of the socially engaged abstract public art that proliferated in Detroit in the early 1970s.
When I'm not doing the above, I lead operations, communications, and member relations at the Green Garage, a sustainable shared workspace in the Cass Corridor.
All views expressed here are my own.