We recently ventured to Midland, two hours north of Detroit, to tour the Alden B. Dow Home & Studio, and to Flint, where we visited Lawrence Halprin's Riverbank Park. Both sites were recommended to us by friends, and both represent significant but perhaps underappreciated achievements in modernist design in Michigan. I'm grateful to have had the chance to get to know both of these developments, and to assess the startling contrasts between them. 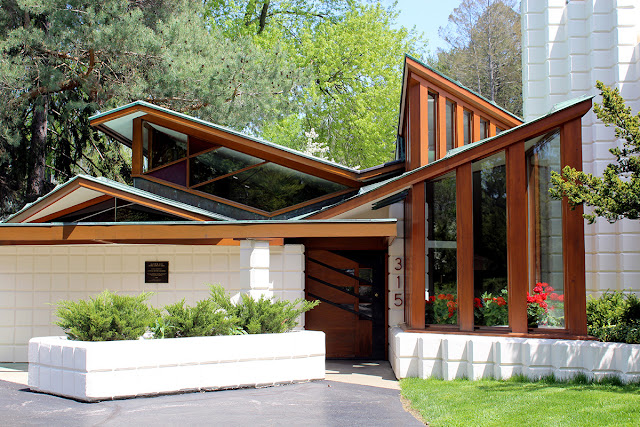 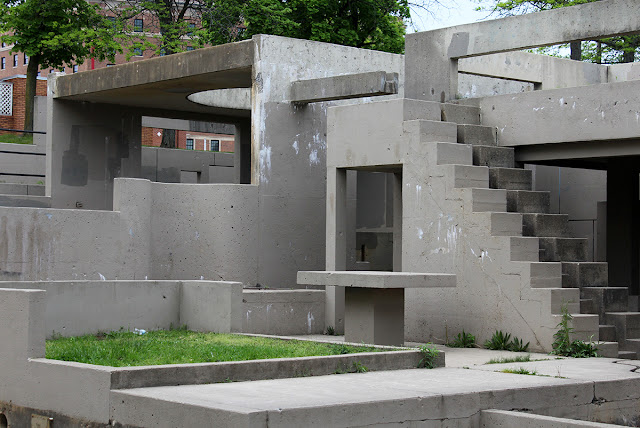 ALDEN B. DOW HOME AND STUDIO

Alden Dow (1904-1983) was a son of Herbert Henry Dow, founder of Dow Chemicals, and the philanthropist Grace A. Dow. He was a prolific modern and organic architect (after Frank Lloyd Wright), leading the design of more than 500 buildings across the country. In Midland, in particular, his influence was profound—he designed dozens of residential, civic, and commercial buildings, and his promotion of modernism evidently attracted a number of other similarly-inclined architects to Midland, resulting in a remarkable preponderance of modernist structures in this curious, conservative company town.


Dow designed his home and studio, nestled among extensive greenery and a manmade pond, between 1934 and 1941. 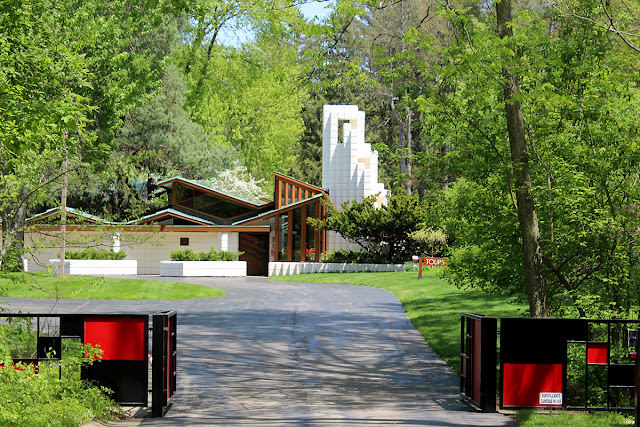 Seen from either its commercial entrance (above) or residential, the sprawling, low-slung building belies its astonishing 22,000 square feet. I learned from our tour guide that it is constructed primarily out of block made from recycled ash from Dow Chemical. The architect called this material "unit block," and it distinguishes many of his other residential buildings throughout Midland. 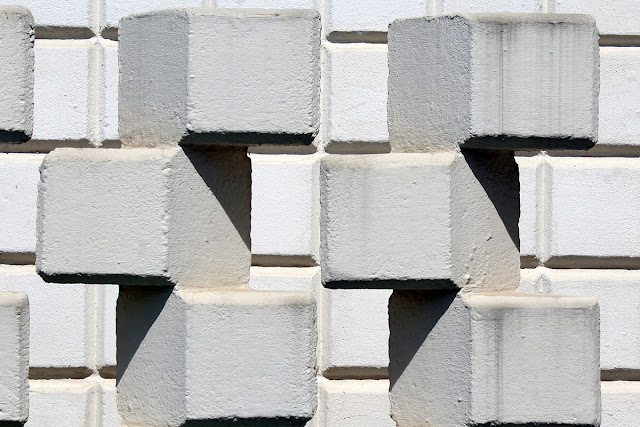 The block is everywhere in the house and on the grounds, and also extends the home into the pond via a scattering of pedestrian islands made from the same material, which elegantly collapse the border between the structure and the landscape. This is also a playful gesture, one that invites a visitor to explore, to wander, to hop among the stones—which, according to our guide, was typical of Dow's sensibility. 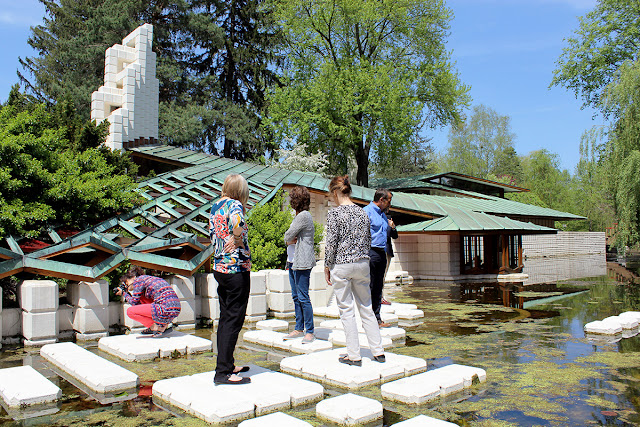 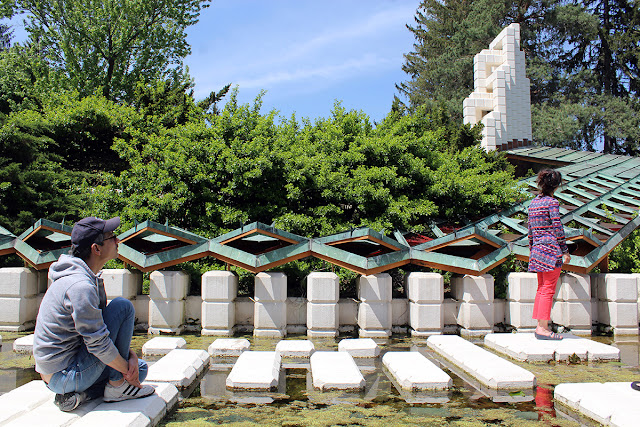 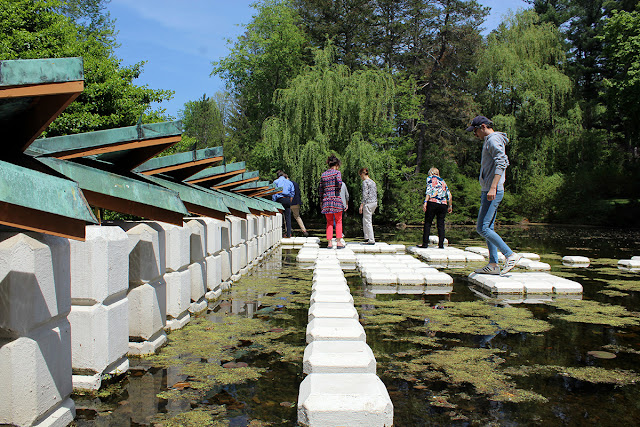 We couldn't take pictures in the house, but that spirit of adventure or escapade permeates inside, whether in the extreme compression and expansion of space from room to room, in long interior and exterior hallways, or the surprisingly vivid use of bright, saturated colors—pinks, purples, and greens that reference the lush flora outside—to draw one's attention up toward windows and ceilings that soar and fold. 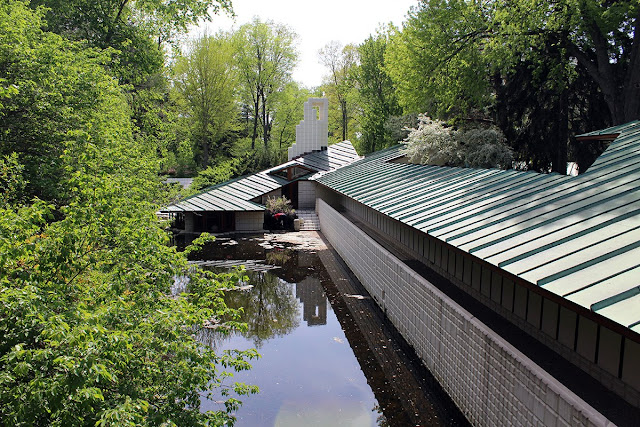 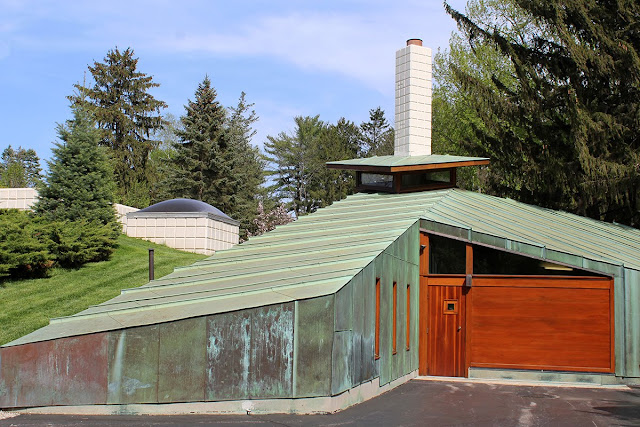 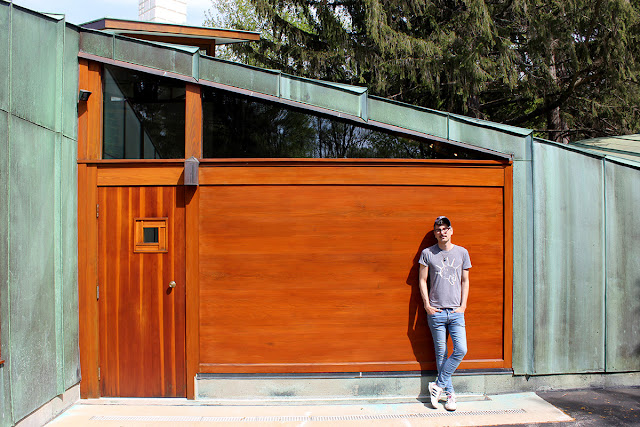 The tour was an extraordinary experience, a rare opportunity to spend time in a truly beautiful, expansive, and well cared for place that was nonetheless human-scale, vivacious, warm, and idiosyncratic—an enlivening, playful, ever-shifting wonderland of ingenious and humane design.

Afterward, we embarked on a couple-hour interlude that basically consisted of us driving around Midland, spotting and pausing to admire more than a dozen modernist homes, and getting to know a friendly local named Laura who was initially suspicious of our interest but then proud to point out a few key streets where we could maximize our mid-century rubbernecking. Then we hit the road to Flint—just about halfway back home from Midland to Detroit.

In the mid to late-1970s, Flint's fortunes were faltering. In an effort to revitalize the downtown, boosters and philanthropists organized the construction of a new downtown park to be designed by the firm of Lawrence Halprin (1916-2009), a Bay Area-landscape architect noted for his dynamic public spaces. Or so we learned from Cade Surface, a friend of a friend who has studied Riverbank Park extensively and has advocated for its preservation, and who happens to live just a few blocks away. 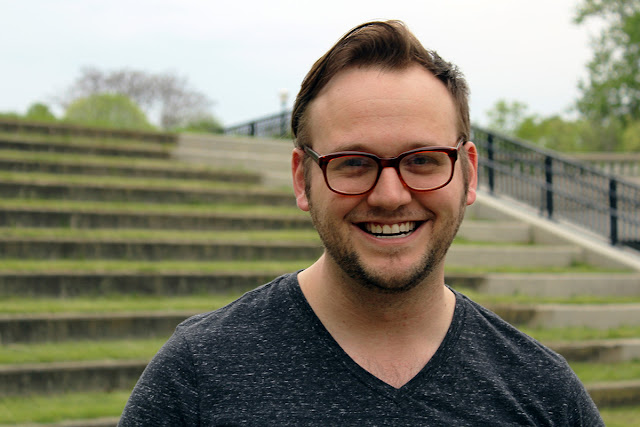 Cade took us all around the ten acre park, explaining that it embodies a key concern of Halprin's, who worked closely with his wife, the choreographer Anna Halprin: it is a space that invites people not simply to walk through it, but to dance—that is, to move through it in various and imaginative ways. In addition to the variety of perspectives it offers from which to watch other people, Riverbank Park, like the Dow House, encourages people to hop from space to space, to climb, to explore, to discover. 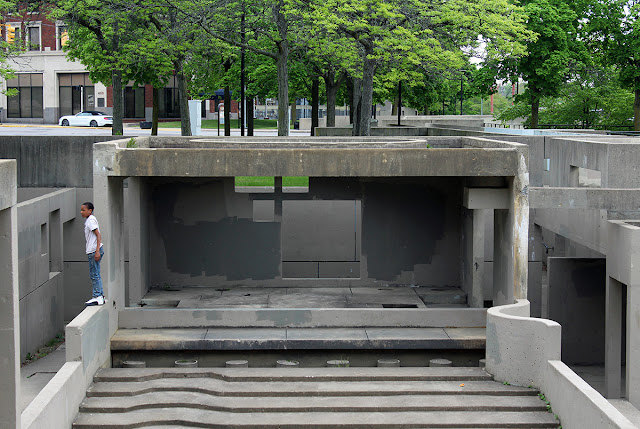 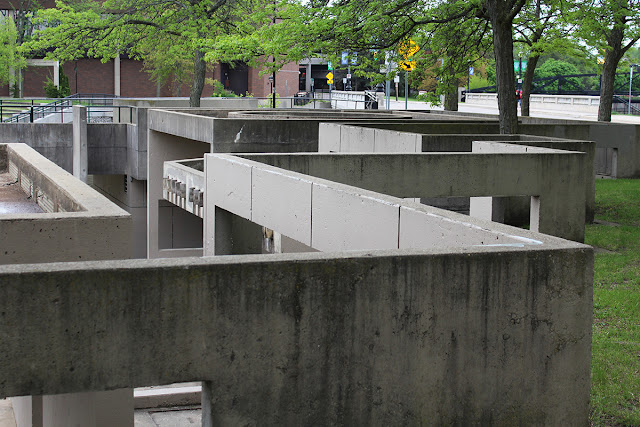 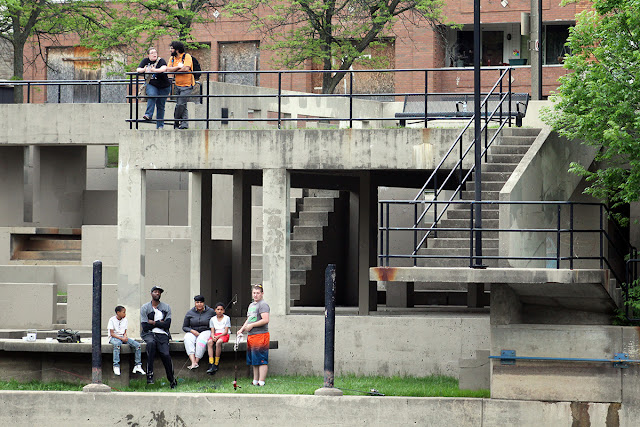 As you can see from the photos, Riverbank Park is made mostly of concrete, a material I'm personally very fond of (hence my interest in going there!). I'm one of those Brutalist weirdos who wants to tell you how soulful concrete is, how comforting and natural. I guess there is something about its sturdy matter-of-factness, or maybe its roots in the ancient world, that draws me to it. And there is, in fact, a classical quality to Riverbank Park, with its succession of outdoor rooms, its oculi and amphitheatre, its insistence on the ideal of the public. 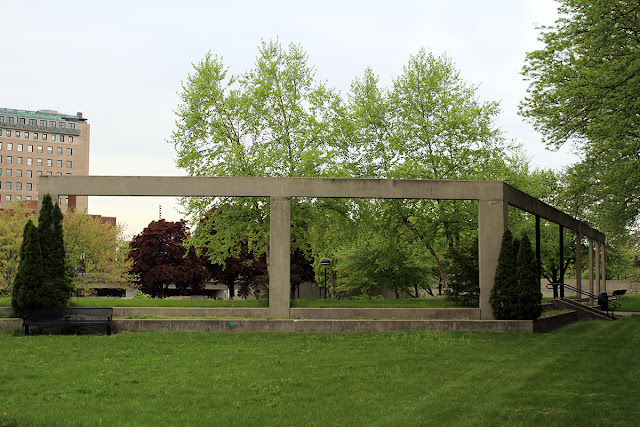 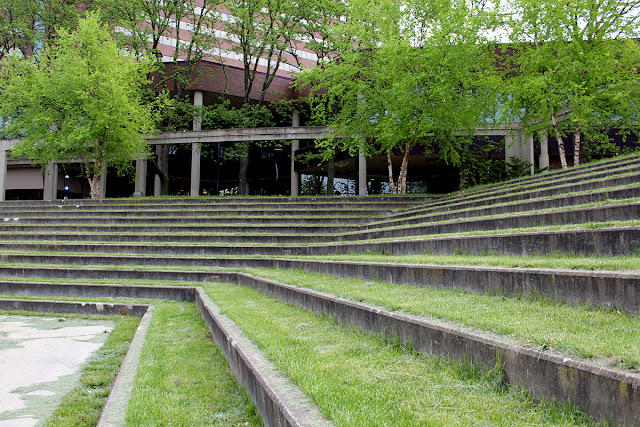 But Riverbank Park was meant to be more than concrete geometric forms, grass, and trees; it was at one time permeated and enlivened by the Flint River itself, via a feat of engineering that involved the use of two nearby dams, an Archimedes screw, and an aqueduct, a system whereby water regularly coursed through the structure, cascading down steps and spouts and into pools and channels.


Currently, the park is dry, which gives it an austere and forlorn feeling. Cade explained that on advice from the federal government, Flint has gone about dismantling the two dams to minimize the risk of flooding downtown. The aqueduct and Archimedes screw have also been removed. It sounds like water can still be made to pass through the park piecemeal, but with effort, and only on special occasions. 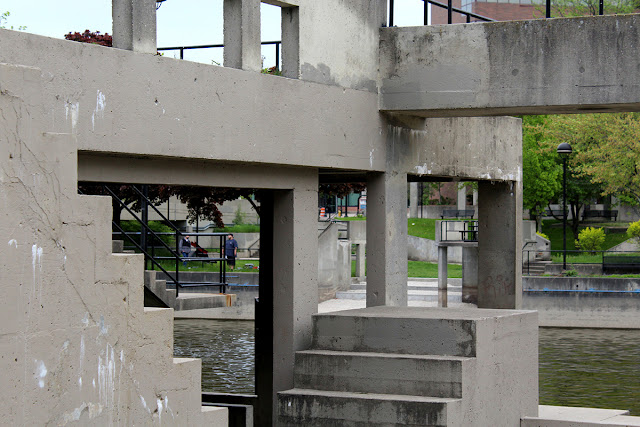 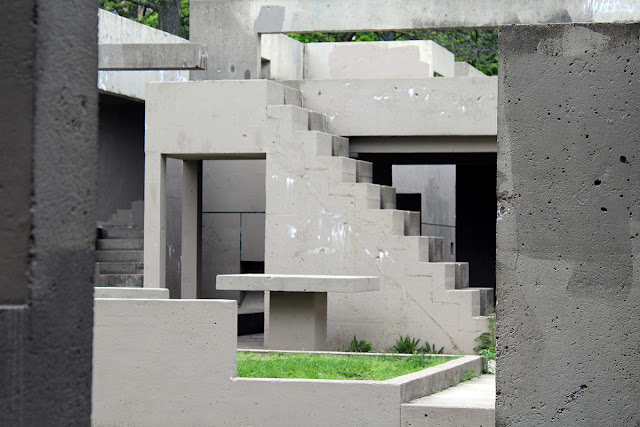 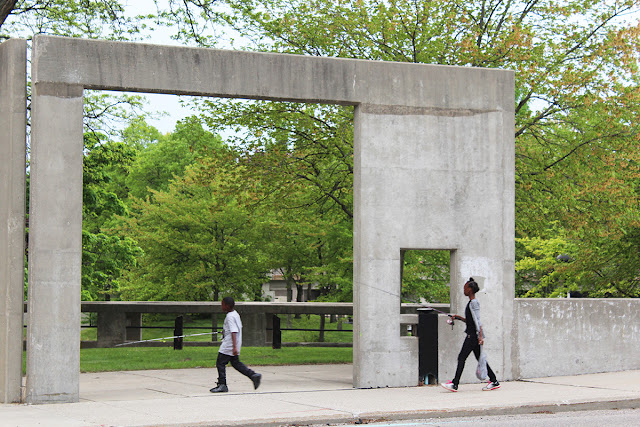 The future of the park is uncertain. Our quick visit suggested that it is still used, but in addition to the malfunctioning water system, Riverbank Park does not seem to be well cared for (little wonder, in a city that, according to Cade, has just one full-time employee working for the entire park system). Cade said that one plan calls for most of it to be leveled and replaced with grassland. Along with other community members (including Emma Davis, a dance instructor at UM-Flint, who staged a community-driven performance there in 2014), he continues to advocate for its preservation as a place of local and national distinction, citing its singular character and the fact that numerous of Halprin's other spaces elsewhere in the country remain both vital and protected.


Part of what made our visit to the park somewhat sad is the profound disconnect between the soaring ambitions of its creators (one might say their hubris) and the earthbound economic reality of life in Flint. This was meant to be a grand place, and evidently it was, for a time—but grand places are expensive to maintain. How could Riverbank Park possibly have thrived after the successive social and economic crises that have rocked Flint's beleaguered citizens these last decades?

Even dry, still, skeletal, the park is a beautiful place. Yes, there is something integral missing, but it still feels sacred and surprising, like something from a dream. And in fact, as I fell asleep later that night in Detroit, I started dreaming that I was back there, under the sun, but that there was water rushing all around, down the steps, through the channels, spilling into basins, catching the light, splashing. The park was alive with water. It was a lovely vision of a rare and special place. I don't know if, after an hour and a half introductory visit, I have any right to advocate on behalf of the preservation of Riverbank Park, but I can't help but hope that I'll get a chance to experience that vision for real one day, and that many others will too. 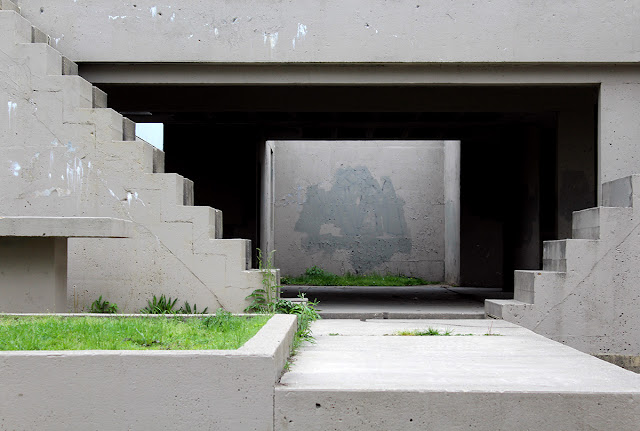 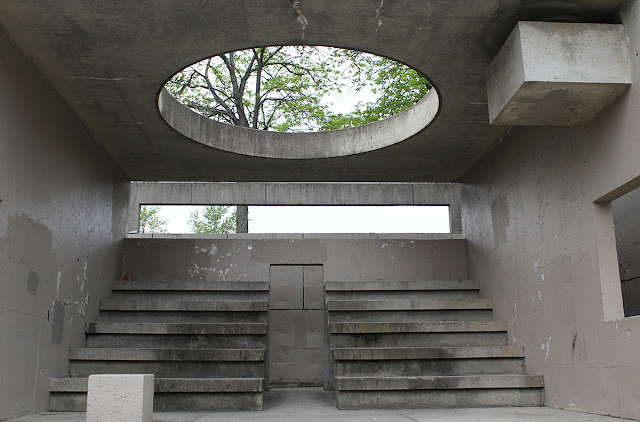 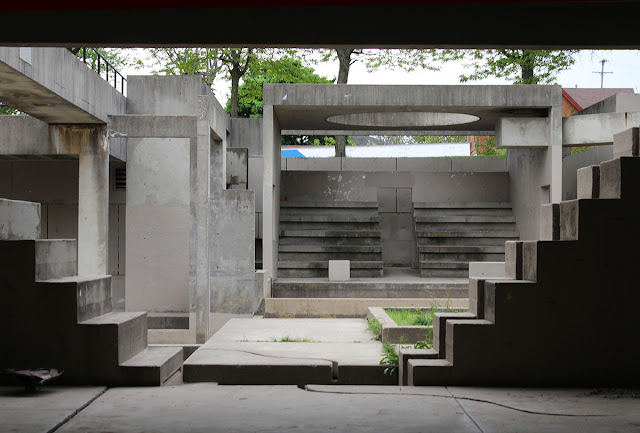 Posted by Matthew Piper at 5:10 PM

I'm a Detroit-based writer, editor, and librarian at large. I'm particularly interested in modern and contemporary art, architecture, and urbanism.
I'm the editor-in-chief at Essay'd, where we publish short, illustrated essays about contemporary Detroit artists. My work has also been featured in Curbed, Detroit Research, Infinite Mile, KnightArts, Model D, and the second edition of Thanks For the View, Mr. Mies.
I'm currently researching a book about the ongoing impact of the socially engaged abstract public art that proliferated in Detroit in the early 1970s.
When I'm not doing the above, I lead operations, communications, and member relations at the Green Garage, a sustainable shared workspace in the Cass Corridor.
All views expressed here are my own.